Home PEOPLE Distinctions Stars of the Past Ireland

Monty Rosenberg was christened Mortimer.  His mother was an avid reader of romantic fiction and the hero of the bodice ripper she was reading when Monty was born in 1923 was called Mortimer.   At home from infancy he was always ‘Monty’.
Monty played cards from an early age.  He learned bridge by watching others playing.  The Jewish Institute in Belfast had the highest standard of club bridge in Belfast in the 1940s.  Monty observed and learned.  In his early days as a player he worked on the principle that he had two opponents at the table and only one partner.  If he did anything unusual then of those at the table, he misled twice as many opponents as partners.  He was known as a ‘flair merchant’. 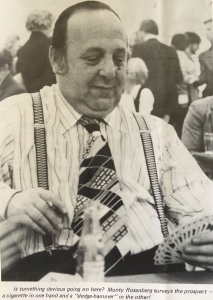 Monty played to win.  He enjoyed bridge.  He had a presence at the table.  Although he always professed to play straight up the middle his opponents rarely believed it.  Things happened when Monty was at the table – sometimes good, sometimes bad – but usually different.  There was always action whether it was his bidding system which was designed to reach a final contract of 3NT whenever it was remotely playable or a sparkling play or defence.  If only he could have taught other players the secret of the Monty effect what a fortune he would have made.
Monty played for Northern Ireland in Camrose matches against England, Scotland and Wales between 1955 and 1992.  There were 110 matches during his Camrose career and he played in 77 of those matches.  He played with ten different partners the last being his son Derek in 1992.  His most treasured Camrose memory was playing on the team which defeated England in 1976 – it was only in the thirty fourth series of Camrose matches that Northern Ireland recorded a first win against England.

Monty represented Ireland in the European Open Team Championships in Torquay in 1960, in Lausanne in 1979 when Ireland won a medal [bronze] for the first time (partnering Rex Anderson), Salsomaggiore in 1985, Brighton in 1987 and Turku in 1989.  He played on the Irish team in the World Team Olympiad in Venice in 1988.

In Irish Bridge Union events Monty and his partner won the Moylan Cup awarded to the winners of the all-Ireland Pairs in 1958 and 1969 and was a member of teams winning the Egan Trophy awarded to the winning all Ireland team in 1970, 1980 and 1994, and the Burke Trophy Team Championship in 1972 and 1990.

Monty believed that bridge should be played using a simple bidding system with few or no conventions.  He was forced in time to add a convention or two, but no more than two, so that his bidding system first described as Stone Age Acol was elevated to the level of Steam Age Acol.

Monty served as President of the Irish Bridge Union as well as Chairman and later President of the Northern Ireland Bridge Union.  He was Competitions Secretary for the NIBU from 1989 until 1999. Monty played bridge in bridge clubs most nights with any person who asked him to play.  He was a challenging partner and a devastating opponent.

As a host Monty was unfailingly generous.  His ready wit and extensive repertoire of anecdotes made him a renowned after dinner speaker. As a bookmaker Monty was seriously involved in predicting the future.  Alas his predictions on the outcome of horse races was often incorrect.  In his later years he had a better success rate in predicting the outcome of bridge matches, and would offer odds on his prediction being right.  When questioned as to how he could be so uncannily accurate, he would say that he was born under a sign.  As he was born in July it was assumed that he was referring to Leo.  However Monty always maintained that the sign said ‘Vote for Gladstone’!

In recognition of his services to bridge and the Northern Ireland Bridge Union Monty was made an honorary member of the Union.