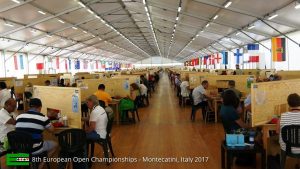 The Open Teams is a transnational event without gender or age restrictions welcoming players from all over the world, without limitation as to the number of participants per country. Initially played with two qualifying phases, one in seeded groups followed by a “Swiss”, it consists as of 2013 of a “Swiss” qualification only, directly followed by a knockout phase.

Click on the Event number below for the tournament website, on the Venue for rankings and on the Winner for team members.