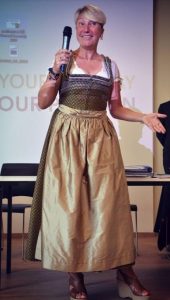 Sabine Auken (neé Zenkel) had an unusual introduction to bridge, crediting her motivation Agatha Christie’s detective Hercule Poirot. She was reading one of Christie’s murder mysteries where the murder was committed during a rubber bridge game and Hercule analysed the players’ bridge skills to discover that only one of them could possibly have committed the crime. “I must learn more about this Bridge game”, she said – thus sparking her life-long involvement in Bridge that has taken her right to the top of the game worldwide.

German born Sabine qualified from university in Finance & Business Administration and has used this qualification in the US, Denmark and Germany, when bridge does not interfere!
She has won many medals of every colour, in European & World Teams & Pairs events in Women, Mixed and Open Categories, playing successfully with many different partners – starting with Daniela von Arnim and currently with Roy Welland.

Sabine has also been involved in administration, being elected to the EBL Executive for the 1997 – 2001 term and has acted as Ambassador for bridge across the globe. She is also an author – “I Love this Game” is a regular on player’s bookshelves (now in e-readers!).

Her two sons, Jens Christian & Maximilian have learned how to play bridge but prefer to play basketball (????) but Sabine is very supportive with “everyone must find their own path!”
“Bridge has accompanied me throughout my life. There were many victories and more defeats. I have traveled throughout the world and visited countries I had not even heard of in my geography lessons! I’ve been in sports stadiums and played in tents, camping sites, fine hotels, millionaire mansions, President’s and Royal palaces. Everywhere I have found like-minded people where there is no role for place, skin colour, religion, politics and gender. All were there under the same conditions to compete at the bridge table. The enthusiasm for our game builds a solid bond of friendship across cultural, religious and social divides with people who you would never have met under different circumstances.”

Acknowledgements to the German Bridge Federation and Bridgewinners for material accessed from their websites.