Jón Baldursson was born in 1954. He started to play bridge while very young and was a coach for the Icelandic Junior team from 1982-1989. 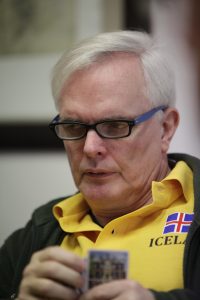 He has been team champion of Iceland on 15 occasions, and has won the Iceland Cup 16 times. Additionally, he has been Nordic countries champion on 5 occasions, the most recent in Norway in June 2019. He has the highest holding of masterpoints of all Icelandic Bridge players.

He was World Champion in the Bermuda Bowl in Yokohama 1991 with the Icelandic team. He won the Generali Masters 1994 which is an unoffical individual World championship. Jón was part of a trans-national mixed team that won the Gold medal in the WBF Mixed Teams Championships in 1996.
He remains a very active bridge player and was a member of the Icelandic Bridge team which played in Ostend 2018