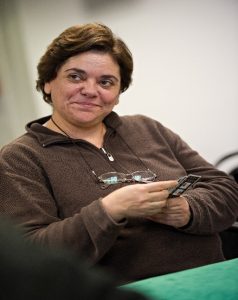 Former world number one, double world champion in women’s teams, five-time European women’s team champion, Catherine d’Ovidio was considered by the experts as the most talented player of her generation.

Born in 1959 in Raincy, married, she began bridge at the “Le Raincy” club in Villemomble, a club which Michel Perron, another gifted player, began his bridge career.

Sadly, Catherine passed away in 2020.