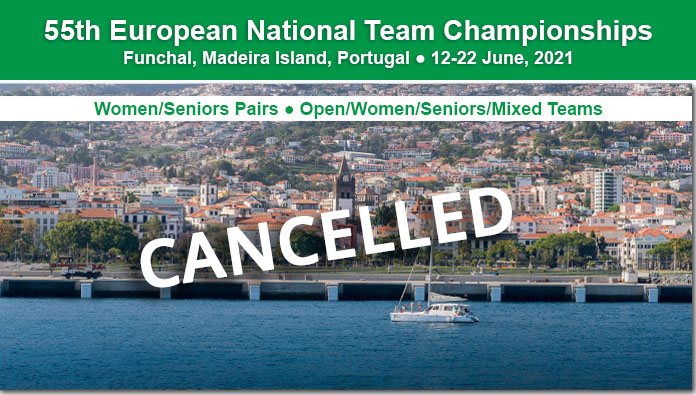 The EBL is disappointed to announce that, due to the ongoing uncertainty surrounding the Covid-19 pandemic and the situation disimproving in so many countries, the National Team Championships planned for June 2021 in Madeira have been cancelled.

With the co-operation of our very flexible and accommodating hosts, the Portuguese Bridge Federation, we hope to finally go to Madeira in June 2022, for the twice postponed National Team Championships.

In the meantime, should the WBF decide to go ahead with the World Teams Championships later this year, the EBL will organise an alternative method to determine the Zone 1 qualifiers. If such qualification will be held online, it is likely to be within the original Championship time period – 12 – 22 June.

The WBF has not yet made its final decision and may not do so before sometime in May.

In preparation, the EBL is finalising a detailed protocol for an online event which would include, amongst many other security features, players playing in a designated domestic location, set up according to very specific criteria, supervised by independent international observers.